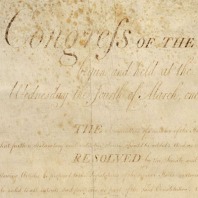 Watch this inside video tour (below) of the Newseum’s updated News History Gallery. The exhibit features 400-plus historical newspapers, newsbooks, and magazines —  documents that reported some of the greatest and most amazing news stories. You can visit the Newseum’s web site to explore some of the other exhibits without leaving your home or school.

After you watch the video, check out and sign up for NewseumEd, a site that is filled with ideas for teaching First Amendment and media literacy and with resources that can be easily downloaded. These are terrific connected world teaching tools that can be used in 21st Century classrooms.

The mission of the Newseum, located in Washington, DC, is to explain, promote, and defend the five freedoms in the First Amendment of the United States Constitution.

Can you name the five freedoms that are addressed in the First Amendment?