I have known six people whose families were forced to move into United States government Japanese internment camps. It’s been an honor for me and my family to listen to their stories — though not always easy to hear about or imagine the cruelty they experienced. The internment, a reaction to the war with Japan and called an evacuation by the United States government, began in 1942 and essentially imprisoned more than 117,000 people. Two-thirds of them were born as American citizens and over half were children,

February 19th, the day in 1942 that President Roosevelt signed an executive order known as the internment order, is a Day of Remembrance in many states. Educators and parents can use the day to understand more — and help 21st Century children learn more — about the internment of Japanese families during World War II. Today, as we deal with the challenges of increasing diversity in the United States and recognize our immigrant history, it’s more important than ever to understand what happened and why the United States now recognizes the internment policy as a mistake.

As U. S. President Gerald Ford said, “Not only was the evacuation wrong, but Japanese Americans were and are loyal Americans.”     Today’s connected world offers educators and parents many authoritative resources that can support learning, exploring the injustices experienced by Americans of Japanese descent and sharing poignant photos or men, women, and children.

You can find resources about this unfortunate period in United States history at the Japanese American Digital Archive, located at the University of California’s Calisphere site. It  includes letters, photos, diaries, and more. The Library of Congress offers a Teacher’s Guide of Primary Sources on the Japanese American Internment. The PBS site features information about the children who lived in the camps. Educator Larry Ferlazzo, at his Edublog site, has put together a set of teaching resources on the internment Japanese Americans.

In 1942, the U.S. Government hired noted photographer, Dorothea Lange to take pictures of the Internment camps. Lange did not like what was happening to Japanese Americans, but she felt that her photos could contribute to a realistic historical record. Unfortunately, government censors confiscated her photographs and hid them away in the National Archives where almost no one could see them for nearly 60 years. 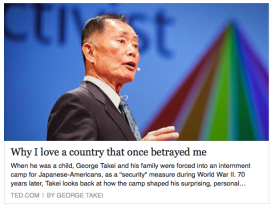 You can read much more about Lange’s photographs of the internment camps at the AnchorEditions blog. You can also view many of her photos at the Dorothea Lange gallery at the National Archives and at a WHYY feature that’s a part of PBS Learning.

Finally, my thanks to colleague, Jennifer Carey, for recommending in her comment below George Takei’s powerful TedX talk, Why I Love the Country That Once Betrayed me.

We cannot learn enough about the misjudgments and injustices that occurred when the United States government detained American citizens solely because of their race and ethnic background.

2 thoughts on “Japanese Internment in the U.S. — Information to Share With Today’s Students”