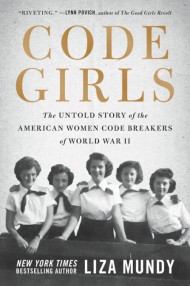 Today we often hear that children must learn how to code as the only way to be prepared for the technical challenges they will encounter as adults. I used to teach coding to children at my school, but after reading Code Girls, I am reminded that we should not lose sight of the importance of a broad education that emphasizes languages, math, science, music, and all the other subjects that make up the liberal arts. This type of education serves people well, because it ensures that students possess thinking skills and develop the wherewithal to learn, when necessary, new types of technical skills, such as coding and programming.

in Code Girls author Liza Mundy tells the story of how young women, many of whom were academically prepared in the liberal arts to become teachers, came to work for the Army and Navy in Washington, D.C. during World War II. They mastered extraordinary technical skills, learning how to decipher complicated and perplexing coded wartime communications.

The book describes how thousands of these young women — recruited with no idea of what they would be doing — learned how figure out cyphers and break codes, thereby ensuring that the United States military knew what its enemies were planning or doing. The women poured over intercepted messages from enemy countries and by breaking open these messages helped to save lives, sink ships, down airplanes, and fool enemies. Their work helped to change the course for the United States in World War II.

The Army and Navy code-breaking projects were top-secret, so as soon as young women arrived, they signed an oath stating that they would never share anything about the work they had done. Most code girls kept these secrets throughout their lives — one reason it took so long for the story to be told.

So how did the war effort manage to connect with these women?

With most young men in uniform during World War II, Army and Navy recruiters went out to women’s colleges, teachers’ colleges or just visited small towns around the country, looking for well-rounded and loyal female candidates. Some students, recommended by professors, quietly took preparation courses at their colleges while others attended training classes once they arrived in Washington.

Liza Mundy’s book is filled with references to stories, letters, photos, and documents from the Army and Navy and also, interestingly enough, material from the National Security Agency. Her research was exhaustive, and it fills 39 pages with notes at the end of the book —  information that is just as fascinating as the story itself. For me what stands out, again and again as I read the book, absorbed the research, and marveled at the story-telling is how broadly prepared the women were — at a time when few women attended college and fewer still graduated —  to undertake the arduous technical learning and often confounding work.

In addition to searching for historical documents and archival information about women and the war, Mundy also connected with former code girls who were still alive and with whom she conducted countless interviews. Most of the women were in their 90s, and some were in assisted living communities. In Code Girls the journey of one woman, Dot Braden, weaves in and around the recollections of other women — oral histories, explanations, and vivid descriptions of how they went about figuring out ciphers and breaking codes. As a bonus at the end, we even learn a bit about the women’s lives after World War II.

Mundy discovered the existence of code girls almost by accident, when she spotted a reference to a project in an article that her husband was reading. In a sense, the story found her, but it is disquieting to think that had she not discovered the hidden history, the code girls might never have directly shared their stories. A fascinating chapter about women and early technology, like so many other stories, could have been lost. (See links below for other MediaTechParenting blog posts and stories about women and early technology.)

Part adventure narrative, part history and biography, the Code Girls story is astonishing, and it’s hard to put down. The women — as they hacked their way through messages or encrypted or broke the encryption of communications also made bona-fide contributions that helped build the foundation for the digital world that was to come. Most importantly perhaps, they proved that people who are well prepared academically can master new technical skills when significant problems need solutions.