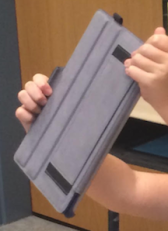 Sometimes kids get so ultra-focused on their iPads that they don’t notice anything that’s going on around them, and sometimes parents and teachers despair. There are, however, situations where 21st Century digital kids’ intensive engagement and concentration can be put to good use — even with a digital device.

Physician Dominique Chassard, an anesthesiologist in Lyon, France, wanted to find out whether children preparing for pediatric ambulatory surgery would do just as well if they had iPads to play with before an operation as with a routine pre-anesthesia sedative. The study authors divided participant families into two groups. Half of the children received the standard sedative treatment and the other half were given iPads so they could play with games and puzzles.

Specifically, Dr. Chassard and his colleagues randomly allocated 112 children aged 4 to 10 years who were about to have surgery into two groups, 54 of whom received the sedative Midazolam before anesthesia and 58 of whom were given iPads for playing during the 20 minutes before anesthesia. The researchers wondered whether a child’s focus on a digital device might decrease anxiety and stress — and other potential problems — while surgery preparations occurred before anesthesia — and whether the iPad could serve the same purpose as the sedative.

The researchers assigned psychologists to observe and record the children’s behavior and as well as their parents’ anxiety at regular intervals, beginning when the families arrived, through the point when they received anesthesia, and post-surgery. More than one psychologist observed each patient.

The researchers in Dr. Chassard’s project observed that iPads worked as well as the initial calming medication and there were no potential side effects to worry about when the children played with and concentrated on the tablets. The psychologist observers also noted that parents seemed more satisfied after the child’s surgery.

Dr. Chassard commented, “Our study showed that child and parental anxiety before anesthesia are equally blunted by midazolam or use of the iPad. However, the quality of induction of anesthesia as well as parental satisfaction were judged better in the iPad group. Use of the iPads or other tablet devices is a non-pharmacologic tool which can reduce pre-operative stress without any sedative effect in pediatric ambulatory surgery.”

So a child’s intensive, shut-out-the-world concentration on a digital device may sometimes be helpful!

Author’s Note: My thanks to Dr. Dominique Chassard for communicating with me via email and sharing documents about his research.