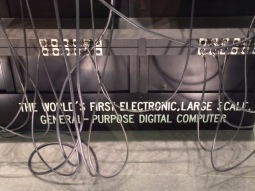 People — young and old — enjoy learning about the first computer in the United States, ENIAC, booted up in 1946. Every 21st Century learner needs to know about this amazing machine and the story of the first programmers.

A few weeks ago I visited Philadelphia and had a special opportunity to visit ENIAC. This huge, old-fashioned computer is owned by the Smithsonian Institution  (read this article), but parts of it are still housed in a building at the University of Pennsylvania, almost exactly where it was originally set up. ENIAC could be  programmed to do extensive calculations much faster than humans could calculate.

The letters in ENIAC stand for Electronic Numerical Integrator And Computer. 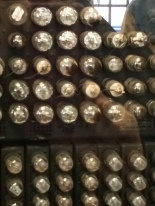 ENIAC was conceived and created in the middle of the 1940s by John Mauchly, PhD and J. Presper Eckert, Jr., and it began working as a bona-fide computer in 1946.

Interestingly, a small group of women mathematicians figured out how to use it and how to program it, and they also performed troubleshooting duties. Before ENIAC the Army recruited these women to serve as “human computers” during the World War II. They collaborated on a top-secret project, working day and night to figure out extensive calculations for ballistic tables for the weapons used in Europe and the Pacific war theaters. After the war a fair number of the women stayed on to work on ENIAC. 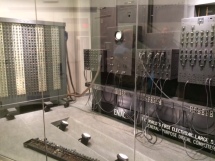 I’ll write another post with more details about these women, but to get started learning more about them you might want to read a September 2014 Fortune magazine article, Walter Isaacson on the Women of ENIAC.

A Few Facts About ENIAC 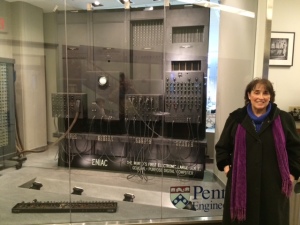 2 thoughts on “ENIAC: The First U.S. Computer and How Women Made It Work”