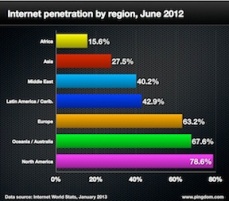 Do you wish you could amaze the digital kids in your life with trivia or fun facts about the connected world?

For the past couple of years, the Royal Pingdom site has posted a yearly overview of Internet statistics. The post, Internet 2012 in Numbers, shares some interesting figures, and they will indeed help you amaze the digital natives in your life. Moreover, these statistics can serve as excellent conversation starters and provide good context to help connected learners understand more about the size and scope of the digital world that they take for granted.

Here’s a sampling from the 2012 post. By the end of the year the Internet featured:

Check out the many other stats and some nifty graphs. Remember, though, that the statistics are from 2012. Royal Pingdom has also compiled numbers for 2008, 2009, 2010, and 2011, so you can have some fun comparing and contrasting the numbers from year to year (and watching them grow). The site has not posted statistics for 2013 – at least not yet.

One thought on “Amaze Digital Kids with Internet Statistics!”