Read Social Media — The Public Space on Steroids, a May 4, 2012 opinion piece in the Seattle Times.

Today, as everyone is talking about the public stock offering and it’s worth, writer Taso Legos examines the value of Facebook as a societal public space that enables people to share ideas and speak up. Without a doubt, face-to-face communication is occurring less and less in coffee houses and community centers, but we are all aware of that aspect of our 21st Century virtual world communication bargain.

I wonder, though, about what is the best balance between face-to-face and electronic communication — the best to ensure a vibrant democratic process. It’s up to parents and teachers of digital kids to help identify the right balance.

We engage more in the public sphere because it has never been easier to do so.

… the new electronic public sphere offers instantaneous dialogue with little time for reflection. Democracy is thus now on steroids and this speeding up affects how we make decisions.

Facebook has tossed out another challenge to family members, including grandparents, who seek to maintain privacy while still enjoying the social interaction that the social network offers.

Find instructions for disabling the new Facebook facial feature at the BBC blog, WebWise: A Beginner’s Guide to Using the Internet. I’ve compiled the basic steps after reading a number of posts about the new facial recognition addition, but read the whole BBC post for the simplest and most comprehensive explanation.

END_OF_DOCUMENT_TOKEN_TO_BE_REPLACED

Great article in the Wall Street Journal about kids and grandparents and the ways they are communicating with one another. In her May 9, 2001 article, OMG! My Grandparents R My BFF!, reporter Molly Baker takes readers on a “magical mystery tour” highlighting the ways generations are interacting (and sometimes leaving out the generation in the middle).

Last August I wrote about this digital family experience in a post, Yes! Grandma is on Facebook, on my other blog, As Our Parents Age. Below is an excerpt of a post about my daughter and her grandmother.

Join Facebook?  For three years I avoided the site. I knew that some of my friends from work, church, and other activities were joining, but I just did not feel like it was a fit. My daughter, then in graduate school, used the social networking site, and she occasionally suggested I get started with Facebook. Still I refrained.

END_OF_DOCUMENT_TOKEN_TO_BE_REPLACED 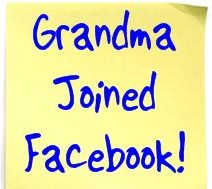 Join Facebook?  For three years I avoided the site. I knew that some of my friends from work, church, and other activities were joining, and of course the kids at school were all over it, but I just did not feel like it was a fit. Way too different, I thought. My daughter, then in graduate school, used the social networking site, and she occasionally suggested I get started with Facebook (she spoke these words in bold). Still I refrained.

At some point, however, I became aware that my mother and my twenty-something daughter were communicating with each other more than usual. They knew things about each other that I did not know. Finally my daughter mentioned that her grandmother  — my mother — was on Facebook and that the two of them had “friended’ one another. That’s when I called Mom, at that time age 81. She explained that her fellow workers from the Obama campaign, exceptional young people she called them, had arranged virtual reunions on Facebook. They wanted her to participate and helped her get started.

So, like many of today’s parents, I found that I was in the middle, but basically out of the generational communication loop. By the time I tuned in, my mother had over 100 friends, all people she knew in one way or another (no strangers and privacy settings in place, she reassured me), and quite a few in her age-range. I signed up for Facebook.

END_OF_DOCUMENT_TOKEN_TO_BE_REPLACED

As soon as children begin using computers, parents can begin to introduce the concept of online privacy, and these conversations focusing on privacy and social networking should continue throughout a child’s pre-adolescent and teenage years. Ongoing discussions can help children understand the power of the digital footprints they leave as they engage in web-based work and play.

Preteens are savvy media consumers, and among the kids I know there is significant buzz about Michelle Obama’s views on Facebook. “Pre-teenagerdom” is such a difficult and challenging time for parents and for the kids themselves. Many children want to hurry up and become teens and joining into social networking activities is one way to make them feel older and even wiser. Feeling and sometimes believing that your parents simply don’t understand technology is another way. So it’s a bit of a blow when the First Lady and First Mom — a person many of them admire — tells their parents to slow things down.

A Few Other Reports 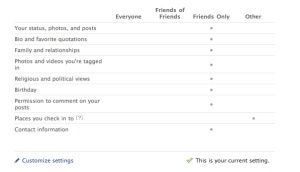 Maintaining control over privacy settings is a required and critical technology task for each Facebook user. Since sharing information is one of Facebook’s primary missions, the company wants to collect and share as much personal information as possible with its advertisers. Facebook sets most new features to share data then when they first debut on the site, and to be fair, social networking is all about sharing information. Thus it is up to each individual to determine just how much information to put out there, making conscious decisions about what the world can see, what close friends can view, and what to keep private.

Our children and their friends are enthusiastic Facebook users, but they do not always focus on the need to pay attention, on a regular basis, to privacy settings. I’ve written many privacy posts on this blog including Getting Serious About Online Privacy and Keeping Track: Adolescents in the Digital Age, pieces that focus on the importance of maintaining family privacy when individual members engage in so many digital activities. Knowing the connection between many social networking sites and advertisers — and the impact it has on a user’s privacy — is critical for everyone, but especially for teens.